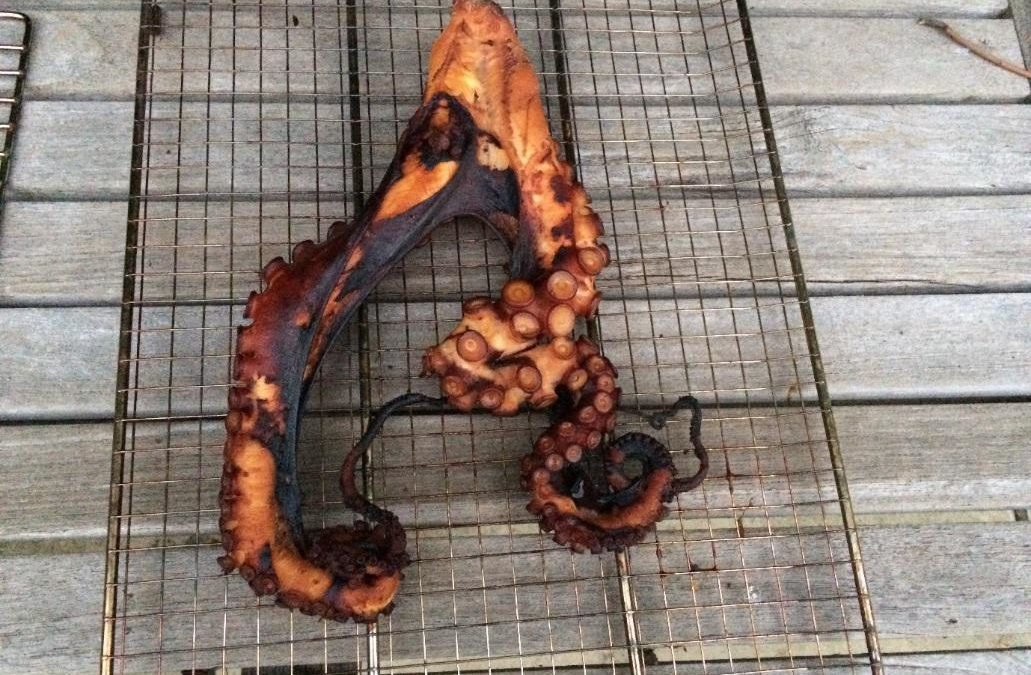 I was at the markets on a Saturday morning as is my want. Everyone else was at home asleep, as is their want. I was in the meat and fish section but as is often the case I really did not know what I was looking for. It was a long weekend so I decided that I had time to do a few things. At all event I saw some nice rainbow trout and some really nice octopus. I knew that I would smoke the trout but was unsure about the fate of the octopus. It was a Saturday morning, the octopus looked at me, I looked at the octopus. What can I say? It seemed like a good idea at the time.

I prepared the trout for smoking as described in A Charcuterie Diary (see p. 190). The question was, how to prepare octopus for smoking? I had two large tentacles. That might not sound like a lot of octopus but they weighed over 1kg. I can say that there is not a lot of authoritative literature on smoking large octopus tentacles. At least not that I could find.

I figured that octopus came from the water. So did trout. It was reasonably thick. Just like a trout. It had a semi-permeable skin. So does trout. It weighed about the same as a couple of trout. Therefore, treat it like a trout for smoking. It seemed like a good idea at the time.

The next day the trout and the octopus were placed into the smoker. The remote temperature probe was installed. The usual process was followed, about 8 hours later, the trout had reached the desized internal temperature. (After the usual temperature stall – see p. 59 of A Charcuterie Diary).

They were put in the refrigerator overnight to cool and set. In the morning all looked good. A taste test ensued. The fish was good. The octopus was another story. It tasted good but was soft and mushy. It had been, I think, over cooked. Why? I do not know.

I assume that it was octopus which had been ‘tenderised’ as all octopus from the fishmonger usually is. This may have contributed to it. I do not know. I think it just needs much less cooking (hot smoking) than fresh fish. Quite surprising really because octopus is notoriously tough. Perhaps ‘un-tenderised’ octopus would be different. This is not an exact science. The work of a charcutier is never done. 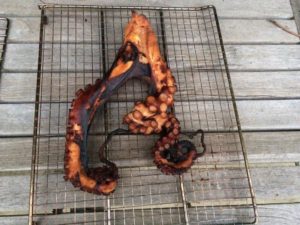 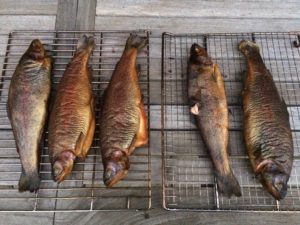